On October 7, at 5:00 pm, twenty-two members of the Club met at Hacienda Carmel for dinner, wine, and good conversation, and to elect officers for the coming year.

At the request the Chair, Lindy Perez provided a list of the Club’s many activities of the past year. After dinner, members shared in turn the associate of Stevenson that they would most like to meet and spend time with.

The Hacienda Chef and the wait staff were introduced and given a round of applause in sincere appreciation of the delightful meal that had been furnished to the members present. The meeting was adjourned at 7:00 p.m.

The Detailed Story of Stevenson and the Carmel Valley Goat Ranchers

Lindy Perez, historian of the Robert Louis Stevenson Club and docent at the Stevenson House, provided the results of her research into the lives of two goat ranchers who saved the life of Stevenson when he fell gravely ill while camping at San Clemente Creek in 1879.  Stevenson eventually recovered at their cabin in the depths of Carmel Valley and returned to Monterey and to his further life of accomplishment and fame.

Ms. Perez related how the letters of RLS, local newspapers, and census reports corrected some myths and revealed the surprising stories of two very different American frontiersmen whose courage, hard work, and civic pride contributed to the character of early Monterey.

Beverages and light refreshments were provided following the talk. 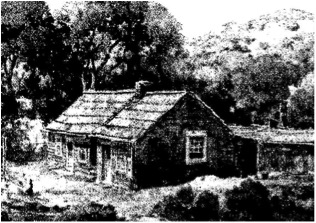 Salon – Travels with a Donkey

On Sunday July 16, a salon of fifteen club members and guests met at the home of Hugo and Maureen Bianchini in Monterey. The event featured members’ appreciation of Stevensons’s book, “Travels with a Donkey in the Cevennes”.  Finger food and  souvenirs related to RLS’s 12 day camping trip in France, described in the book, were shared.

On Saturday, May 20, at 4:00 pm in the afternoon, members of the RL Stevenson Club of Monterey and guests met at he historic Stevenson House in Monterey. The get-together commenced with a film of Stevenson’s life, including his time in Monterey. The film had been produced by Club President Monica Hudson, in cooperation with the Film Department of the Monterey Bay State University.  The film showing was followed by sitting down to tea, sandwiches, and cookies in the Stevenson House Garden.

On February 25, a membership meeting and pot-luck dinner convened at the home of Ruth Krotzer and her husband Harold. Later Harold entertained us with a magic trick. Twenty-one members were present. The Club business consisted of a membership vote to elect officers. The nominees were: President – Monica Hudson, Treasurer – Lindy Perez, Secretary – Bende Kelly, Website – Patrick Gallagher, Events – Ruth Krotzer, Board members at Large – Keith Decker, Rosemary Smith, and Edna Barker. A motion to declare the nominees elected was adopted by unanimous vote. Monica Hudson was presented with a floral arrangement in appreciation of her continued Presidency.

At the start of the dinner Patrick Gallagher proposed a toast based on a passage from Robert Louis Stevenson’s essay, Crabbed Age and Youth. “We sail in leaky bottoms and on wild and perilous waters;  … We have heard the mermaids singing and know that we shall never see dry land any more.  Old and young, we are all on our last cruise. If there is a fill of tobacco among the crew, for God’s sake pass it around, and let us have a pipe before we go.”The attending members expressed gratitude to the Krotzers for generously hosting the get-together in such delightful fashion, after storm damage had prevented holding the meeting at the planned location, the home of Hugo and Maureen Bianchini.

On September 24, 2016, nineteen members of the Club met at 5:00 p.m. at Hacienda Carmel for drinks, dinner, good conversation and the election of officers for 2017.

Members shared their favorite quotes, some printed and placed on the tables. Keith Decker was awarded a certificate of achievement for his fifty years as an actor of note and contributor of programs for the Club. Stories of Samoa were shared by our two Samoan members.

From R. L. Stevenson Club President Monica Hudson, “I am happy to report that the RLS Club has gained new members who have stepped forward to help organize and lead club activities and take on Club Board positions. We welcome all members to share their event ideas so we can work together to make them a reality Please check the Newsletter calendar for events.

This year the club is also off to a good start with volunteers again staffing the Stevenson House Museum on Saturdays from April to September. This year more funding is allowing State Parks to hold the house open on a more regular basis. Club members will have a chance to share their love and excitement on all things RLS with park staff which is new to this experience.

I want to take this opportunity thank Michael Green, who manages the Monterey State Historic Park, for his stalwart support and willingness to facilitate events at the Stevenson House which celebrate RLS’s life and work. We have a a great and rare opportunity, let us make good use of it.”

Mr. Menikolff, professor emeritus, University of Hawaii, and one of the world’s leading authorities on Robert Louis Stevenson, spoke to a full house on Saturday, April 2, 2016. The book David Balfour, which sometimes goes by the title Catriona, has been edited by Mr. Menikoff, and is newly published by the Huntington Library Press. A sequel to “Kidnapped”, part love story and part adventure, it was written a year before Stevenson’s death. The new edition is based on Stevenson’s final manuscript. Menikoff spoke of the English publishers who took liberties with original texts, excising many Scottish words and phrases. This present edition is true to Stevenson’s hand written text.

The story picks up where “Kidnapped” ends and continues with the education and formation of character of the hero, David. One of Stevenson’s strongest and most interesting female characters is Barbara Grant, who befriends David and Catriona. Interesting aspects of the book are the characters who represent the law. Stevenson shows that while they are trained in logic, reason and truth they fall victim to greed and political ambition. The book, which includes beautiful N. C. Wyeth illustrations, is available from the Custom House store.

Ten members of the Club accepted the invitation of Pati Foster for coffee at the home of the Headmaster of Stevenson School on October 22, 2015. The magnificent Rosen Center at the School has an RLS quote in large letters on the wall facing the entrance of the building. It reads, “We admire splendid views and great pictures, yet what is truly admirable is the mind within us that gathers together these scattered details for delight.” Stevenson photos, pictures, and writings and are centered in various locations in the School. There are two bronze copies of the St. Gaudends Stevenson bust like that at the Stevenson House. In the dining hall is a large painting of “The Casco” and the school’s coffee-snack bar is named “Simoneau”.

The club is grateful to Mrs. Foster and the school librarian, and to Maureen Bianchini, for making the arrangements for this visit.