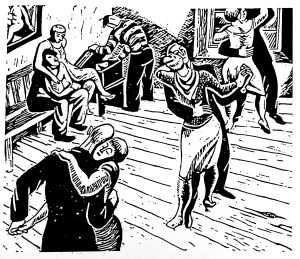 One of the last residents of the Stevenson House was the California Impressionist painter August François Gay. Called “Gus”, Gay lived and had a studio in the building from the early 1920s. Gay is known for his membership the Oakland-based Society of Six painters. After he moved to Monterey, members of the Society would visit him, talk art, review their recent work, and enjoy Gay’s Bohemian life style.  See the illustration above, “The Party”, a block print by artist Helen Bruton. Gus Gay is attending to the record player, and the three Bruton sisters are dancing.

During the hard times of the depression, and especially after his marriage in 1934, Gay’s painting was chiefly for commission. A notable work of this time is the Works Progress Administration commissioned mural painting Fisherman for the Old Customs House, Monterey, which for some time was displayed in the Stevenson House, and more recently at Casa Gutierrez. At the same time to earn a more reliable living, Gay turned to other crafts, woodworking and decoration, on his own and in cooperation with other artists and designers. Much of this work was done at the Stevenson House.

Researching the crafts work Gay carried out leads to many historically interesting projects and enterprises. Gay made a dining room table and chairs for the amazingly beautiful Byzantine style Crocker-Fagan house in Pebble Beach. Gay did gilding, wood carvings, and furniture-making for the Monterey Guild founded by the artist Effie Fortune. This group did highly praised liturgical interiors for Catholic churches, locally and around the country. Saint Angela’s Church, Pacific Grove, contains notable works of the Guild, including an altarpiece by Fortune. For a Guild project at the Mission of San Juan Bautista, by hand Gay made 22 pieces of Magnolia wood furniture in the Spanish Colonial style. The Monterey Guild was the only US craft group whose work was displayed at the 1939 Golden Gate International Exhibition on Treasure Island.

A new chapter of Gay’s life began when interior designer Frances Elkins moved her design studio and showroom into the Stevenson House in the late 1930s. It may be that the presence of Gay’s workshop was a factor in her move. Gay and an apprentice did much furniture making for Elkins, and Gay’s wife did sewing for her. Elkins’ clients included the Royal Hawaiian Hotel, and many movie stars, including Edward G. Robinson and Norma Shearer. It was Elkins’ practice to acquire an antique piece and then have Gay or others build replicates of it for sale.

When the state of California acquired the Stevenson House in 1941, Gay and his wife were notified that they should move. Gay built a house in Carmel  that he and his wife lived and worked in until his death in 1948. Elkins was permitted to stay in the building. During her stay fire marshals found that both floors were being used as an upholstery and antique shop with bales of cotton, duck feathers and portable electric heaters. After the end of World War II Elkins moved her studio and sales office to Fisherman’s Wharf and the conversion of the Stevenson House to its present dedication to historical display could begin.